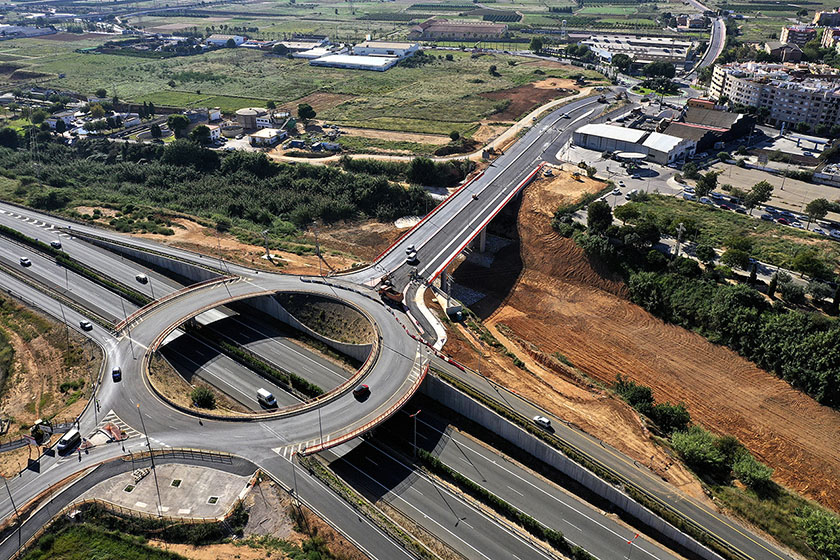 Posted at 10:08h in Uncategorized by Susana

This new infrastructure relieves the daily traffic of 28,069 vehicles

This is a work developed by the Regional Ministry of Housing, Public Works and Territorial Planning which has a budget of 3,548,622.81 euros and has been executed in a period of 18 months. The main objective is to improve the mobility of the environment, relieving traffic through the towns in the area by 28,069 vehicles per day.

This new Grupo Bertolín project is an important engineering work that includes a bridge 90 meters long and 22 meters wide. The new roadway has two lanes in each direction of traffic, a bicycle lane and a sidewalk of more than two meters to facilitate pedestrian traffic. The deck is made up of trough beams resting on 12 m high piles.

The new access solves a problem of direct connections that the town of Torrent had with the highway, since until its construction there was no direct connection between the highway and the urban area. At present, access to the town center from the north is indirectly through several traffic circles and urban roads, with insufficient capacity to distribute the current traffic.

In addition, the new bike lane is the extension of the CR-403, which runs parallel from the Alaquàs ring road to Torrent, thus connecting both municipalities by means of a road for non-motorized traffic.

GRUPO BERTOLIN, S.A.U., as the responsible of the web, informs that this page uses proper cookies and of a third-party to collect information to help us optimize your visit on our website. You can accept or deny the cookies pressing on "accept" or "deny", as well as, obtaining more information and configurating your preferencies. Read more
CONFIGURATE COOKIESACCEPTDENY
Privacy policy and cookies